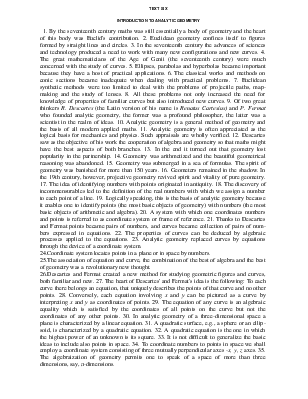 1. By the seventeenth century maths was still essentially a body of geometry and the heart of this body was Euclid's contribution. 2. Euclidean geometry confines itself to figures formed by straight lines and circles. 3. In the seventeenth century the advances of sciences and technology produced a need to work with many new configurations and new curves. 4. The great mathematicians of the Age of Genii (the seventeenth century) were much concerned with the study of curves. 5. Ellipses, parabolas and hyperbolas became important because they have a host of practical applications. 6. The classical works and methods on conic sections became inadequate when dealing with practical problems. 7. Euclidean synthetic methods were too limited to deal with the problems of projectile paths, map-making and the study of lenses. 8. All these problems not only increased the need for knowledge of properties of familiar curves but also introduced new curves. 9. Of two great thinkers R. Descartes (the Latin version of his name is Renatus Cartesius) and P. Fermat who founded analytic geometry, the former was a profound philosopher, the latter was a scientist in the realm of ideas. 10. Analytic geometry is a general method of geometry and the basis of all modern applied maths. 11. Analytic geometry is often appreciated as the logical basis for mechanics and physics. Such appraisals are wholly verified. 12. Descartes saw as the objective of his work the cooperation of algebra and geometry so that maths might have the best aspects of both branches. 13. In the end it turned out that geometry lost popularity in the partnership. 14. Geometry was arithmetized and the beautiful geometrical reasoning was abandoned. 15. Geometry was submerged in a sea of formulas. The spirit of geometry was banished for more than 150 years. 16. Geometers remained in the shadow. In the 19th century, however, projective geometry revived spirit and vitality of pure geometry. 17. The idea of identifying numbers with points originated in antiquity. 18. The discovery of incommensurables led to the definition of the real numbers with which we assign a number to each point of a line. 19. Logically speaking, this is the basis of analytic geometry because it enables one to identify points (the most basic objects of geometry) with numbers (the most basic objects of arithmetic and algebra). 20. A system with which one coordinates numbers and points is referred to as coordinate system or frame of reference. 21. Thanks to Descartes and Fermat points became pairs of numbers, and curves became collection of pairs of numbers expressed in equations. 22. The properties of curves can be deduced by algebraic processes applied to the equations. 23. Analytic geometry replaced curves by equations through the device of a coordinate system.

24.Coordinate system locates points in a plane or in space by numbers.

25.The association of equation and curve, the combination of the best of algebra and the best of geometry was a revolutionary new thought.

26.Descartes and Fermat created a new method for studying geometric figures and curves, both familiar and new. 27. The heart of Descartes' and Fermat's idea is the following: To each curve there belongs an equation, that uniquely describes the points of that curve and no other points. 28. Conversely, each equation involving x and у can be pictured as a curve by interpreting x and у as coordinates of points. 29. The equation of any curve is an algebraic equality which is satisfied by the coordinates of all points on the curve but not the coordinates of any other points. 30. In analytic geometry of a three-dimensional space a plane is characterized by a linear equation. 31. A quadratic surface, e.g., a sphere or an ellipsoid, is characterized by a quadratic equation. 32. A quadratic equation is the one in which the highest power of an unknown is its square. 33. It is not difficult to generalize the basic ideas to include also points in space. 34. To coordinate numbers to points in space we shall employ a coordinate system consisting of three mutually perpendicular axes -x, y, z axes. 35. The algebraization of geometry permits one to speak of a space of more than three dimensions, say, л-dimensions.