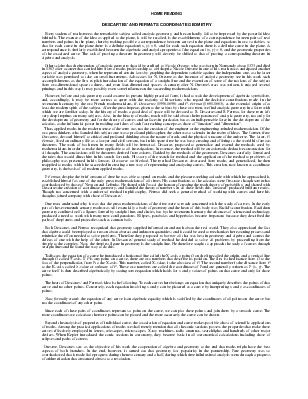 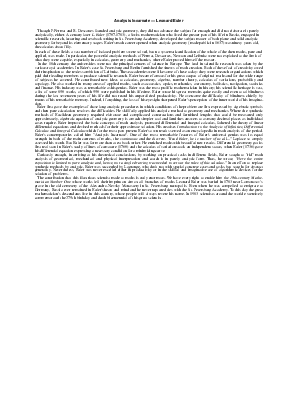 Every student of maths meets the remarkable subject called analytic geometry, and he can hardly fail to be impressed by the powerful idea behind it. The essence of the idea as applied to the plane, it will be recalled, is the establishment of a correspondence between pairs of real numbers and points in the plane, thereby making possible a correspondence between curves in the plane and equations in two variables, so that for each curve in the plane there is a definite equation/(x, y) = 0, and for each such equation there is a definite curve in the plane. A correspondence is similarly established between the algebraic and analytic properties of the equation / (x, y) = 0, and the geometric properties of the associated curve. The task of proving a theorem in geometry will cleverly be shifted to that of proving a corresponding theorem in algebra and analysis.

Others claim that the invention of analytic geometry should be credited to Nicole Oresme, who was born in Normandy about 1323 and died in 1382 after a career that carried him from a maths professorship to a bishopric. Nicole Oresme in one of his math tracts anticipated another aspect of analytic geometry, when he represented certain laws by graphing the dependent variable against the independent one, as the latter variable was permitted to take on small increments. Advocates for N. Oresme as the inventor of analytic geometry see in his work such accomplishments as the first explicit introduction of the equation of a straight line and the extension of some of the notions of the subject from two-dimensional space to three-, and even four-dimensional spaces. A century after N. Oresme's tract was written, it enjoyed several printings and in this way it may possibly exert some influence on the succeeding mathematicians.

However, before analytic geometry could assume its present highly practical form, it had to wait the development of algebraic symbolism, and, accordingly, it may be more correct to agree with the majority of historians, who regard the decisive contributions made in the seventeenth century by the two French mathematicians, R. Descartes (1596-1650) and P. Fermat (1601-1663), as the essential origin of at least the modern spirit of the subject. After the great impetus given to the subject by these two men, we find analytic geometry in a form with which we are familiar today. In the history of maths a good deal of space will be devoted to R. Descartes and R Fermat, for these men left very deep imprints on many subjects. Also, in the history of maths, much will be said about the importance of analytic geometry, not only for the development of geometry and for the theory of curves and surfaces in particular, but as an indispensable force in the development of the calculus, as the influential power in molding our ideas of such far-reaching concepts as those of "function" and "dimension".

Thus, applied maths in the modern sense of the term was not the creation of the engineer or the engineering-minded mathematician. Of the two great thinkers who founded this subject one was a profound philosopher, the other was a scientist in the realm of ideas. The former, Rene Descartes, devoted himself to critical and profound thinking about the nature of truth, and the physical structure of the universe. The latter, P. Fermat, lived an ordinary life as a lawyer and civil servant, but in his spare time he was busy creating and offering to the world his famous theorems. The work of both men in many fields will be immortal. Descartes proposed to generalize and extend the methods used by mathematicians in order to make them applicable to all investigations. In essence, the method will be an axiomatic deductive construction for all thought. The conclusions will be theorems derived from axioms. Guided by the methods of the geometers Descartes carefully formulated the rules that would direct him in his search for truth. His story of the search for method and the application