Lasers and their uses 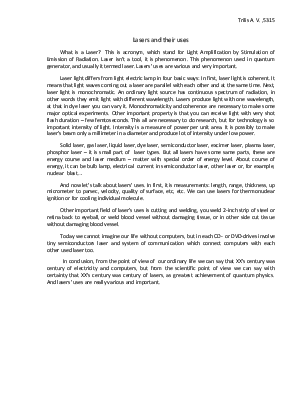 Lasers and their uses

What is a Laser?  This is acronym, which stand for Light Amplification by Stimulation of Emission of Radiation. Laser isn’t a tool, it is phenomenon. This phenomenon used in quantum generator, and usually it termed laser. Lasers’ uses are various and very important.

Laser light differs from light electric lamp in four basic ways: In first, laser light is coherent. It means that light waves coming out a laser are parallel with each other and at the same time. Next, laser light is monochromatic. An ordinary light source has continuous spectrum of radiation, in other words they emit light with different wavelength. Lasers produce light with one wavelength, at that in dye laser you can vary it. Monochromaticity and coherence are necessary to make some major optical experiments. Other important property is that you can receive light with very shot flash duration – few femtoseconds. This all are necessary to do research, but for technology is so important intensity of light. Intensity is a measure of power per unit area. It is possibly to make laser’s beam only a millimeter in a diameter and produce lot of intensity under low power.

Solid laser, gas laser, liquid laser, dye laser, semiconductor laser, excimer laser, plasma laser, phosphor laser – it is small part of  laser types. But all lasers have some same parts, these are energy course and laser medium – matter with special order of energy level. About course of energy, it can be bulb lamp, electrical  current in semiconductor laser, other laser or, for example, nuclear  blast…

And now let’s talk about lasers’ uses. In first, it is measurements: length, range, thickness, up micrometer to parsec, velocity, quality of surface, etc, etc. We can use lasers for thermonuclear ignition or for cooling individual molecule.

Today we cannot imagine our life without computers, but in each CD- or DVD-drives involve tiny semiconductors laser and system of communication which connect computers with each other used laser too.