Requirements for the six-monthly progress reports 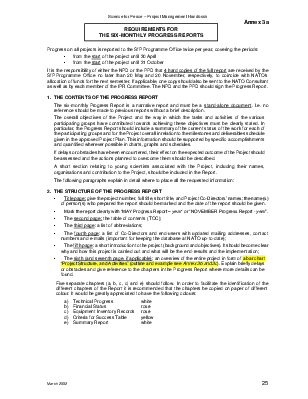 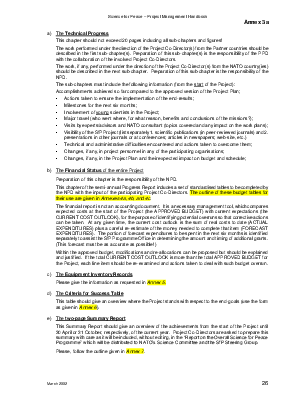 Progress on all projects is reported to the SfP Programme Office twice per year, covering the periods:

§  from the start of the project until 30 April

§  from the start of the project until 31 October

It is the responsibility of either the NPD or the PPD that 4 hard copies of the full report are received by the SfP Programme Office no later than 20 May and 20 November, respectively, to coincide with NATO's allocation of funds for the next semester. If applicable, one copy should also be sent to the NATO Consultant as well as by each member of the IPR Committee. The NPD and the PPD should sign the Progress Report.

1.   THE CONTENTS OF THE PROGRESS REPORT

The six-monthly Progress Report is a narrative report and must be a stand-alone document. I.e. no reference should be made to previous reports without a brief description.

The overall objectives of the Project and the way in which the tasks and activities of the various participating groups have contributed towards achieving these objectives must be clearly stated. In particular, the Progress Report should include a summary of the current status of the work for each of the participating groups and for the Project overall in relation to the milestones and deliverables schedule given in the approved Project Plan. This information should be supported by specific accomplishments and quantified wherever possible in charts, graphs and schedules.

If delays or obstacles have been encountered, their effect on the expected outcome of the Project should be assessed and the actions planned to overcome them should be described.

A short section relating to young scientists associated with the Project, including their names, organisations and contribution to the Project, should be included in the Report.

The following paragraphs explain in detail where to place all the requested information:

2.   THE STRUCTURE OF THE PROGRESS REPORT

§  The second page: the table of contents (TOC);

§  The fifth page: a short introduction to the project (background and objectives). It should become clear why and how this project is carried out and what will be the end-results and the implementation;

§  The sixth (and seventh page, if applicable): an overview of the entire project in form of a bar chart “Project Structure, and Activities” (outline and example see Annex 3b and 3c). Explain briefly delays or obstacles and give reference to the chapters in the Progress Report where more details can be found.

Five separate chapters (a, b, c, d, and e) should follow. In order to facilitate the identification of the different chapters of the Report it is recommended that the chapters be copied on paper of different colour. It would be greatly appreciated to have the following colours:

a)  The Technical Progress

This chapter should not exceed 20 pages including all sub-chapters and figures!

The work, if any, performed under the direction