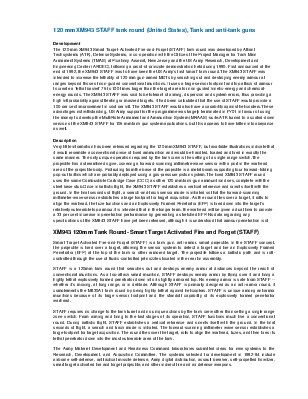 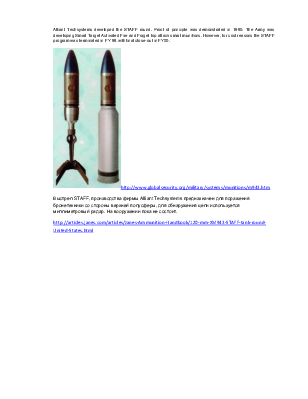 Development  The 120 mm XM943 Smart Target-Activated Fire-and-Forget (STAFF) tank round was developed by Alliant Techsystems (ATK), Defense Systems, in co-operation with the Office of the Project Manager for Tank Main Armament Systems (TMAS) at Picatinny Arsenal, New Jersey and the US Army Research, Development and Engineering Center (ARDEC), following a proof-of-principle demonstration held during 1990. First announced at the end of 1992, the XM943 STAFF was to have been the US Army's first 'smart' tank round.The XM943 STAFF was intended to increase the lethality of 120 mm gun-armed MBTs by searching out and destroying enemy armour at ranges beyond those of non-guided conventional munitions. It uses a large sensor footprint and top attack of armour to create a 'lethal basket' 75 to 100 times larger than the target area for non-guided kinetic-energy and chemical-energy rounds. The XM943 STAFF was said to be tolerant of aiming, dispersion and system errors, thus providing a high kill probability against fleeting or masked targets. It had been calculated that the use of STAFF would provide a 100 per cent improvement in cost per kill. The XM943 STAFF would also have a capability against helicopters.These advantages notwithstanding, US Army support for the programme was largely terminated in FY01 in favour of using the money to develop the MultiRole Armament and Ammunition System (MRAAS)-suite.ATK turned to a scaled-down version of the XM943 STAFF for 105 mm tank gun system applications, but this appears to have fallen into abeyance as well.

Description  Very little information has been released regarding the 120 mm XM943 STAFF, but available illustrations indicate that it would resemble a conventional piece of fixed ammunition and would be handled, loaded and fired in exactly the same manner. The only unique operation required by the tank crew is the setting of a single range switch.The projectile has a streamlined ogive, covering a forward-scanning millimetre-wave sensor with a port in the warhead area of the projectile body. Protruding from the base of the projectile is a metal boom supporting four forward-folding pop-out tailfins which are probably deployed using a gas-pressure piston system.The fixed XM943 STAFF round uses the same Combustible Cartridge Case (CCC) as other 120 mm tank-gun ammunition does, complete with the steel base stub.Once in ballistic flight, the XM943 STAFF establishes a vertical reference and orients itself with the ground. In the final seconds of flight, a search-and-track sensor mode is initiated so that the forward-scanning millimetre-wave sensor establishes a large footprint for target acquisition. As the round flies over a target, it rolls to align the warhead, the fuze functions and an Explosively Formed Penetrator (EFP) is fired down into the target's relatively vulnerable top armour.It is intended that in the longer term, the warhead will be given a dual liner to provide a 33 per cent increase in penetration performance by generating