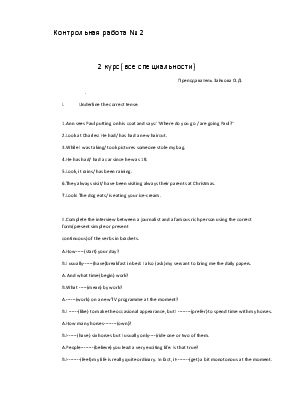 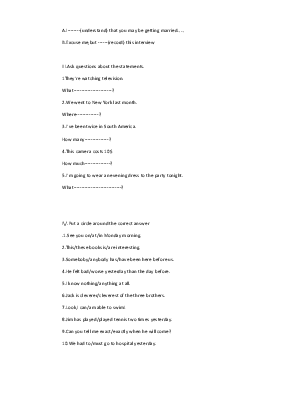 continuous) of the verbs in brackets.

B.I usually------(have)breakfast in bed. I also (ask) my servant to bring me the daily papers.

A. And what time( begin) work?

III.Ask questions about the statements.

3.I’ve been twice in South America.

5.I’m going to wear an evening dress to the party tonight.

I\/.Put a circle around the correct answer

3.Someboby/anybody has/have been here before us.

4.He felt bad/worse yesterday than the day before.

5.I know nothing/anything at all.

6.Jack is cleverer/cleverest of the three brothers.

9.Can you tell me exact/exactly when he will come?

10.We had to/must go to hospital yesterday.

\/.Read the text about travel arrangements for a group of students.  Note down the places and the times only.

Right,I want you to make a note of the details of our trip to London tomorrow. Last year,as you remember, two of you went missing. I won’t see you before then so please make notes now of where you’ve got to be and when. Don’t rely on your friends to do it for you.

This will get us into London early as long as the traffic isn’t too bad. The driver won’t wait for everyone. If you’re late,we’ll have gone. So give yourself plenty of time to get there. Especially those of you who have to get to the station by bus.

You know the buses can be full at that time of the morning.

Now we’ve arranged a tour around the sights with an official guide, so we’re going to go straight to the Tower of London where we’ll meet the guide,but make sure you’re there at ten on the dot.

The tour lasts roughly an hour and a half and  then from half past eleven to one o’clock you’re free to have lunch wherever you want. Make your way to the New Museum where we’meet at one. The museum’s marked on the map.

Spend as long as you like in the museum. I think some of you will  find it quite interesting,especially the space exhibition.

But when you’ve had enough you’re free to do what you want- but most important is to remember that pick up time is at five-thirty outside the National Gallery.  I hope everyone has got that.

Don’t be late otherwise you’ll have to make your own way back by train. Don’t forget to tell your parents that coach get back to school at eight p.m.

\/I. Translate the text in written form. Ask 10 questions to the text.

The Language of  Finance.

There are striking differences between financial markets on the Continent of Europe on the one hand, and in Britain on the other. In Britain, the market is really the City of London. It is  a free market, and it controls most of the flow of savings to investment. On the Continent,either a few banks or government institutions dominate the money markets

In France and in Italy,for example,government  bureaucrats direct the flow of funds to suit their economic plans.

In Germany the flow is directed by the all-powerful banks.

In Britain there is more free interplay of market forces and far fewer regulations, rules and ‘’red tape.

A French  banker summed it up this way : ‘’ On the  Continent you can’t do anything unless you’ve been told you can ; in England on the other hand you can do everything as long as you haven’t been told not  to.’’

There are many basic reasons for  these differences. One is that Continental savers tend to prefer gold, cash or short-term assets. They invest only 10% of their savings in institutions like pension funds or insurance companies. But in Britain 50% of savings goes to them, and they, in turn, invest directly in the equity market. A far lower proportion of savings is put in the banks in the form of liquid assets than on the Continent. Continental governments intervene directly or through the banks to collect savings together and transform them into medium or long-term loans for investment. The equity market is largely by-passed.  On the Continent economic planning tends to be far more centralized than in Britain.  In Britain it is possible to influence decisions affecting the country’s economy from within the City.  It attracts a skilled and highly qualified work force. In France, on the other hand, an intelligent young man who wants a career in finance would probably find the civil service more attractive.

\/II. Choose the correct form of the verbs.