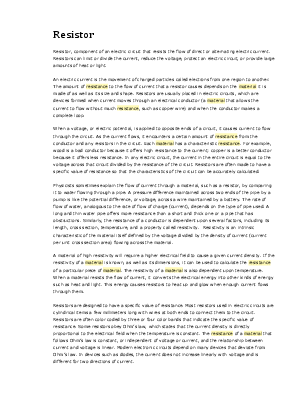 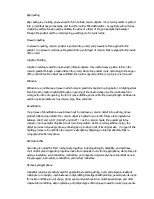 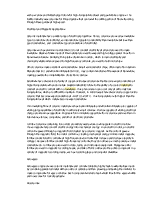 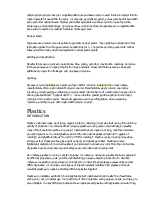 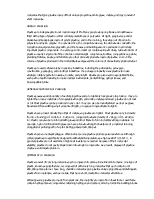 An electric current is the movement of charged particles called electrons from one region to another. The amount of resistance to the flow of current that a resistor causes depends on the material it is made of as well as its size and shape. Resistors are usually placed in electric circuits, which are devices formed when current moves through an electrical conductor (a material that allows the current to flow without much resistance, such as copper wire) and when the conductor makes a complete loop.

Physicists sometimes explain the flow of current through a material, such as a resistor, by comparing it to water flowing through a pipe. A pressure difference maintained across two ends of the pipe by a pump is like the potential difference, or voltage, across a wire maintained by a battery. The rate of flow of water, analogous to the rate of flow of charge (current), depends on the type of pipe used. A long and thin water pipe offers more resistance than a short and thick one or a pipe that has obstructions. Similarly, the resistance of a conductor is dependent upon several factors, including its length, cross section, temperature, and a property called resistivity.  Resistivity is an intrinsic characteristic of the material itself defined by the voltage divided by the density of current (current per unit cross section area) flowing across the material.

A material of high resistivity will require a higher electrical field to cause a given current density. If the resistivity of a material is known, as well as its dimensions, it can be used to calculate the resistance of a particular piece of material. The resistivity of a material is also dependent upon temperature. When a material resists the flow of current, it converts the electrical energy into other kinds of energy such as heat and light. This energy causes resistors to heat up and glow when enough current flows through them.

Resistors are designed to have a specific value of resistance. Most resistors used in electric circuits are cylindrical items a few millimeters long with wires at both ends to connect them to the circuit. Resistors are often color coded by three or four color bands that indicate the specific value of resistance. Some resistors obey Ohm’s law, which states that the current density is directly proportional to the electrical field when the temperature is constant. The resistance of a material that follows Ohm’s law is constant, or independent of voltage or current, and the relationship between current and voltage is linear. Modern electronic circuits depend on many devices that deviate from Ohm’s law. In devices such as diodes, the current does not increase linearly with voltage and is different for two directions of current.

Resistors can help divide voltages, and when combined with other elements can help convert voltages for a specific electrical design. Resistors can also be used to provide intense light or heat