Композитные материалы. Under the circuit of sheathing of KM section into three groups 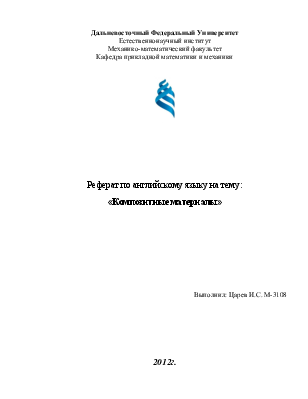 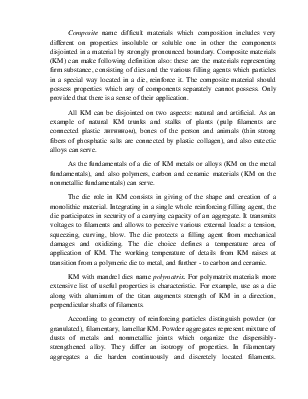 Composite name difficult materials which composition includes very different on properties insoluble or soluble one in other the components disjointed in a material by strongly pronounced boundary. Composite materials (KM) can make following definition also: these are the materials representing firm substance, consisting of dies and the various filling agents which particles in a special way located in a die, reinforce it. The composite material should possess properties which any of components separately cannot possess. Only provided that there is a sense of their application.

All KM can be disjointed on two aspects: natural and artificial. As an example of natural KM trunks and stalks of plants (pulp filaments are connected plastic лигнином), bones of the person and animals (thin strong fibers of phosphatic salts are connected by plastic collagen), and also eutectic alloys can serve.

The die role in KM consists in giving of the shape and creation of a monolithic material. Integrating in a single whole reinforcing filling agent, the die participates in security of a carrying capacity of an aggregate. It transmits voltages to filaments and allows to perceive various external loads: a tension, squeezing, curving, blow. The die protects a filling agent from mechanical damages and oxidizing. The die choice defines a temperature area of application of KM. The working temperature of details from KM raises at transition from a polymeric die to metal, and further - to carbon and ceramic.

KM with mandrel dies name polymatrix. For polymatrix materials more extensive list of useful properties is characteristic. For example, use as a die along with aluminum of the titan augments strength of KM in a direction, perpendicular shafts of filaments.

According to geometry of reinforcing particles distinguish powder (or granulated), filamentary, lamellar KM. Powder aggregates represent mixture of dusts of metals and nonmetallic joints which organize the dispersibly-strengthened alloy. They differ an isotropy of properties. In filamentary aggregates a die harden continuously and discretely located filaments. Filamentary both lamellar aggregates the same as also metal alloys, have anisotropy of mechanical properties.

In a die other components (filling agents) uniformly are arranged. As the leading role in KM hardening is played by filling agents, they often name reinforcers.

The filling agent trial function - to ensure strength and ruggedness of KM. Filling agent particles should have high strength in all interval of temperatures, small tightness, to be insoluble in a die and nontoxical. Reinforcing substances in KM are oxides, carbides (usually - carbide of silicium SiC), silicium nitride (Si3N4), glass or carbon fibers, boron filaments (borovolokna), a steel or tungsten wire.

Zero-dimensional name the filling agents having in three gauging very small sizes of one order (particle).

One-dimensional filling agents have the small sizes in two directions and the size considerably exceeding them in the third gauging (filament).

At bivariate filling agents of two sizes are commensurable with the size of KM and considerably exceed the third (plates, a fabric).

In the shape of a filling agent of KM disjoint on dispersibly-strengthened, stratified and filamentary.

Under the circuit of sheathing of KM section into three groups: with monoaxial, biaxial and трёхосным sheathing (fig. 1, 2 4).

At triaxial (volume) (fig. 1, 4) sheathing is not present a primary direction in filling agent distribution. Distance between zero-dimensional  filling agents of one order. In this case their contents can exceed 15 - 16 %. One-dimensional filling agents settle down in three and more intersected plains.